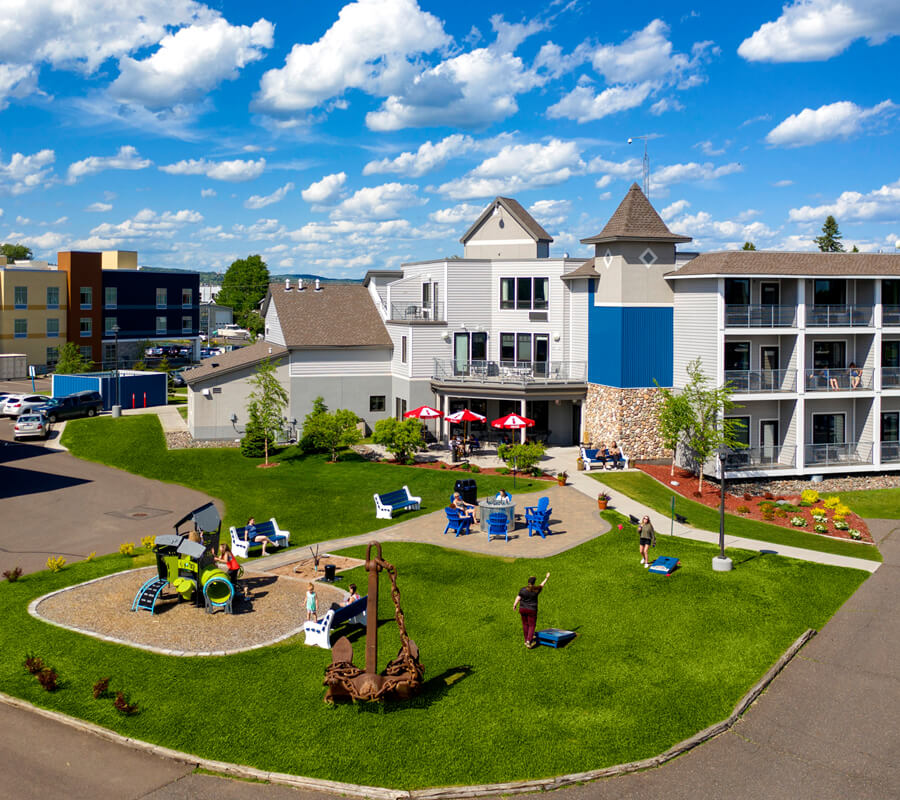 The Park Point Marina Inn is a national award-winning hotel resort located on beautiful Park Point, the world’s longest freshwater sand bar. Nestled in a tranquil setting away from the noise of the city, our resort provides a natural and serene environment to relax in and enjoy the shimmering waters of the world’s largest freshwater lake’s Duluth Harbor.

Built within 50 feet of the water’s edge, overlooking the Lake Superior Duluth Harbor and the sailboats of the Harbor Cove Marina, our hotel has the perfect vantage point to view ships passing through the harbor. With 63 out of 68 rooms having outside decks, we have the highest percentage of rooms featuring decks among all Canal Park hotels and Duluth hotels.

We are excited to have been honored with various national awards in the short time we have been open. Since 2014, we have been awarded the prestigious TripAdvisor Certificate of Excellence/Traveler’s Choice National Award every year and we are a TripAdvisor National GreenLeaders Award winner. In 2019 we were honored to be one of the few Minnesota hotels to be awarded the TripAdvisor Hospitality Hotel Hall of Fame. We have been rated 3 diamonds by AAA every year we have been open and are one of the top rated hotels in Duluth, MN. Our goal is to always be striving to exceed our guests’ expectations and then some. We look forward to hosting you as our guest. 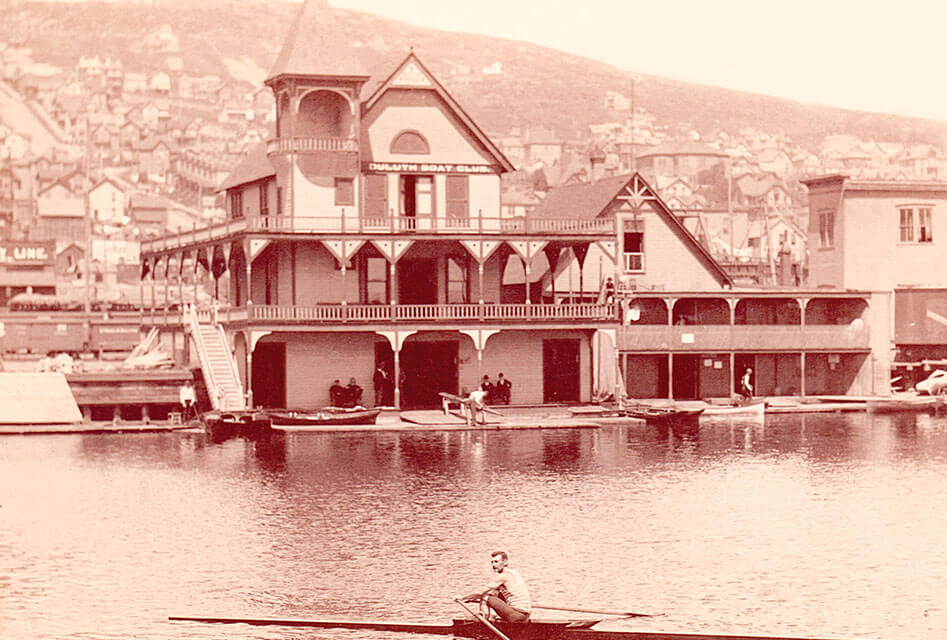 Our Hotel Story and the Duluth Boat Club History

Duluth was once the fastest growing city in America and a busy trading port when Minnesota was a frontier of our young nation. At one time it had more millionaires per capita than any other city. The hotel property itself sits on the site of the land that the legendary Duluth Boat Club occupied in the early 1900’s. The Duluth Boat Club was the largest water club in North America with over 1,400 members. It was the most prestigious private club in the Twin Ports area at the time and in all of Minnesota. Since 1905 there has been a bridge to Park Point, and since 1930 it has been the Aerial Lift Bridge that currently stands. It is now listed on the National Register of Historic Places. The Coast Guard has operated a station on Park Point since the late 1800’s and is a neighbor to the resort.

The Edmund Fitzgerald sailed from Duluth on that fateful night in November and became part of the Lake Superior folklore of shipwrecks. The first lighthouse on this end of Lake Superior was built on Park Point in 1858, a few miles from the hotel. The village of Park Point came to be in 1881, and a ferry was used to shuttle people back and forth across the canal. It cost five cents each journey or one dollar a month.

The Edmund Fitzgerald sailed from Duluth on that fateful night in November and became part of the Lake Superior folklore of shipwrecks. The first lighthouse on this end of Lake Superior was built on Park Point in 1858, a few miles from the hotel. The village of Park Point came to be in 1881, and a ferry was used to shuttle people back and forth across the canal. It cost five cents each journey or one dollar a month. 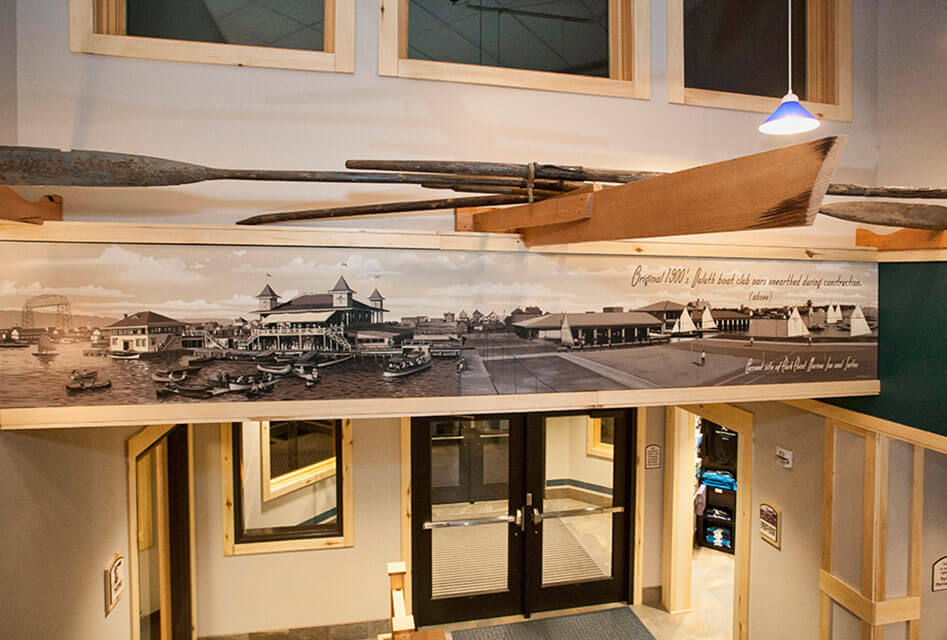 Our Past Influencing Our Future

At the Park Point Marina Inn we have embraced our historical past. We are proud of our heritage and pay tribute to the famous and legendary Duluth Boat Club with our architectural design, and in murals and pictures found in our resort. The interior was designed from pictures from 1909 of the boat club’s public dining and pool areas. Lighting and bath fixtures in our ultra-modern facility resemble boat club amenities from years gone by. 100 year old remnants of wood logs were saved from the St. Louis River and are used in the enhancement of the Harbor Cove Lounge. In the Lounge you’ll find a beautifully unique and historic mural of the boat club as it looked in 1909. The Duluth Boat Club was the largest water club in North America with 1400 members.

All of our guests can enjoy and relive the memories of a golden age of yesteryear while relaxing in the comfort of our new modern hotel resort facility. The hotel was designed to enhance the Park Point waterfront, and not to overwhelm it. The engineers and architects laid out a blueprint on the landscape as to create a beautiful hotel resort that offered magnificent views, but also was environmentally friendly and preserved the heritage and history of the site. 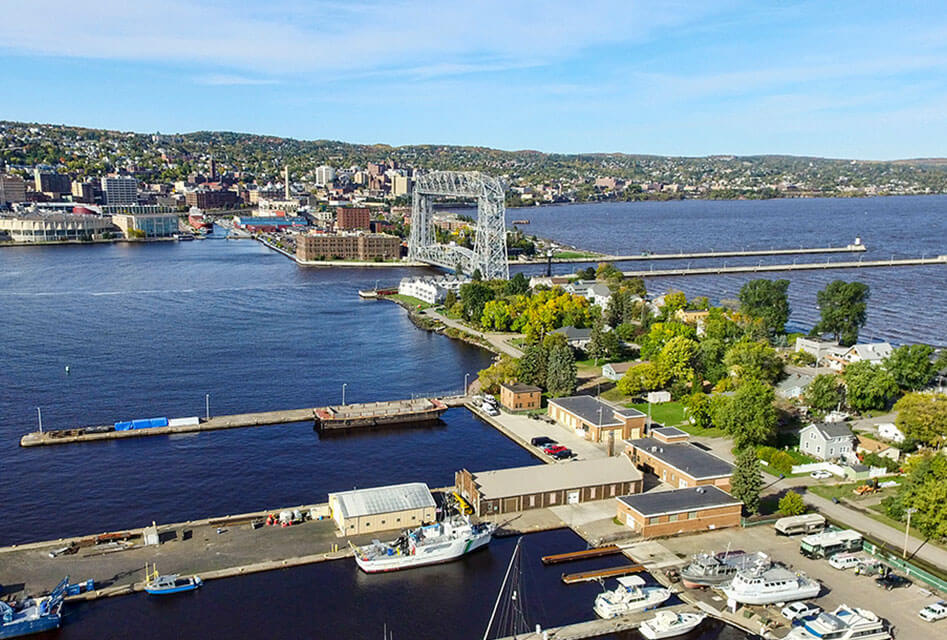 Duluth, Minnesota is a fantastic city to discover at any time of the year. It is rich in history and filled with attractions, sights and a variety of entertainment venues. Festivals and events are held throughout the year so there is always something to do and be a part of. Our hotel location is just a few blocks from the Aerial Lift Bridge, the Lakewalk, Maritime Museum, William A. Irvin Boat Museum, Canal Park, DECC Amsoil Arena and the Bayfront Festival Park and is less than a 15-minute drive from Duluth International Airport.

The Park Point Marina Inn Resort is proud of its green hotel initiatives and policies. We strive to sustain our environment in everything we do and will always do whatever we can to keep our world as eco-friendly as possible. Since we are a Duluth, MN hotel and located on the Duluth Harbor of the world’s largest freshwater lake, we continually take steps to reduce our footprint and conserve our beautiful area for future generations.

We are a five year consecutive TripAdvisor National Award winner. The Park Point Marina Inn has been recognized as one of the top hotels in Minnesota and as one of the very best in Duluth. We are a GreenLeaders National Award winner for our eco-friendly environment throughout the entire resort. We are honored to receive the awards below from National Hospitality and Tourism Organizations. In 2019, we were inducted into the TripAdvisor National Hotel Hall of Fame in honor of our guest’s experiences since opening in 2014. Our Hospitality promise is that we guarantee that on every shift our goal is to always be striving to exceed our guests’ expectations and then some.